It only takes a spark to get a fire going.

Revival and Reformation are words we don’t hear nearly enough, though when we do hear them they often sound dull and cliched. These words are weighty, and they should feel like it. Revival means bringing back to life; it means to revive, to make alive again. Reformation means restructure, to form something again; really, it’s about change. Bring back to life. Make a change.

Neither word is one that you want to have to invoke when it comes to the church, because they demonstrate that something is very, very wrong in the first place. You only need a revival if you’re dead, and if things are working properly you don’t need to call for a reformation. Calling for a church revival or reformation means acknowledging that there’s no pulse in the building! But when revival and reformation are necessary… well, they’re necessary! 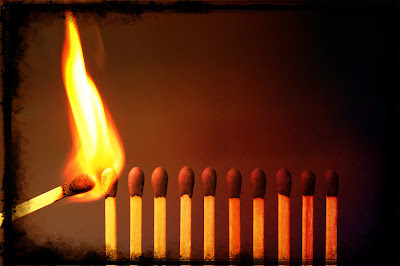 In the Old Testament, Josiah became King of Judah at a time when the nation was spiritually dead. They worshiped idols. They burned incense to other gods. The nation was covered in a smattering of altars and high places devoted to the deities of the surrounding nations. They had forgotten God. When Josiah found the Book of the Law and recognized the sinful, corrupt, lifeless state of the nation, he went to town, sparking a reformation:

Then the king called together all the elders of Judah and Jerusalem. He went up to the temple of the LORD with the men of Judah, the people of Jerusalem, the priests and the prophets—all the people from the least to the greatest. He read in their hearing all the words of the Book of the Covenant, which had been found in the temple of the LORD. The king stood by the pillar and renewed the covenant in the presence of the LORD—to follow the LORD and keep his commands, regulations and decrees with all his heart and all his soul, thus confirming the words of the covenant written in this book. Then all the people pledged themselves to the covenant. – 2 Kings 23:1-3

Josiah tore down and destroyed everything that was leading the people away from God. Altars broken, shattered. Idols ground into dust. And an entire nation was turned back to the Lord. Two thousand years later, when he saw the need for a similar reformation, Martin Luther nailed 95 arguments against the institution of his day to the church door at Wittenberg. The history of the church was changed forever. These men saw that something was wrong; they recognized that God’s people needed to be restored, so they grabbed the paddles and pumped a thousand volt charge into the hearts of the masses.

What about you? Your church, your community – is there a need for revival? If so, it’s got to start with you. A single stone can shoot ripples through the whole pond. A single match can set the world on fire. Get yourself right with God; be alive in him, and let him be your life! Then – prayerfully – go out and make a difference. Make a change. Ignite your world, and let the power of Christ excite it back to life!

SEE YOU FRIDAY AT TGIF: REVIVE!