If you told me that most people who claim to have trouble with God or with Christianity in fact actually have more of a problem with the Church and with Christians themselves, I wouldn’t bother arguing.  In fact, I’d wager that an overwhelming number of those who are strongly anti-God take a look at the Church and decide that the God of the Church must be a pretty sloppy craftsman based on the quality of his product. Churches can get off track.  The Church has gotten off track more often throughout history than I’d like to admit.

We need to look at what the Church is supposed to be; what it could be.

What it once was.

The book of Acts describes the early days of the Church, when the disciples were just starting to figure out how to move this thing forward with Jesus leading them in Spirit rather than in flesh.  To be honest, there are a million ways it could have gone awry.  Instead they built the Church.  Here’s how Luke describes it in chapter 2:

They devoted themselves to the apostles’ teaching and to fellowship, to the breaking of bread and to prayer. Everyone was filled with awe at the many wonders and signs performed by the apostles. All the believers were together and had everything in common. They sold property and possessions to give to anyone who had need. Every day they continued to meet together in the temple courts. They broke bread in their homes and ate together with glad and sincere hearts, praising God and enjoying the favor of all the people. And the Lord added to their number daily those who were being saved.
(Acts 2:42-47)

People devoted to the teaching.  Men and women who shared everything they had with one another, who met every day together, ate together.  They broke bread in each other’s homes.  The consequence? Every single day, more people came and were saved. 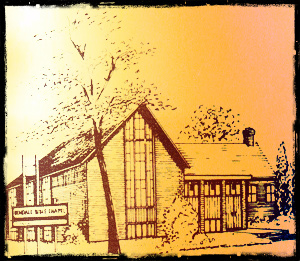 CS Lewis, the author of Mere Christianity and numerous other treasured texts, has this to say about what the Church should truly look like it it seeks to hold fast to the purposes and passions of God:

In the same way the Church exists for nothing else but to draw men into Christ, to make them little Christs. If they are not doing that, all the cathedrals, clergy, missions, sermons, even the Bible itself, are simply a waste of time. God became Man for no other purpose. It is even doubtful, you know, whether the whole universe was created for any other purpose.
(CS Lewis, Mere Christianity, p 199)

Drawing people to Christ; making them little Christs, which is what the word Christian actually means.  This is a Church worthy of the name of Christ.  The question, then, has to be about your Church, about my Church.  Does it look like this?  Are people meeting together to break bread?  Is your Church devoted to the teachings of Christ?  Does your congregation draw others to Christ… or is Jesus incidental?  The Gospel message upon which the Church is built is not incidental, and so our Churches have to put that message and the God of that message first.  And last.

If your Church doesn’t look like this, what are you going to do to change it?  I’m not here to push the thought of bailing – I want to challenge you to be the one to start to make a change, to spark a revival in your Church, in the Church.  Luke and CS Lewis paint clear pictures about what God’s Church needs to look like.  Take that, and with prayer and endurance you can fight to bring this Church, this Faith back to what it was supposed to be all along.